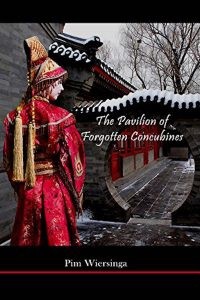 Squeezed between past and future loves, between delicate grace and an almost ruthless literary ambition, ancient obeisance and timeless magnanimity of spirit, the heroine in ‘The Pavilion of Forgotten Concubines’ must survive palace intrigue to keep her head on her shoulders. Life in the aftermath of the Qianlong era being precarious, Lady Cao Baoqin treads on egg shells. Described by Counsellor Heshen as a ‘two-faced demon’, she braves ill-intentioned officials with all the tact she can muster. But her eventful life is and will remain full of dramatic reversals. Wistful as she may be over White Lotus’ dealings, she is soon to join their rank and file.

Pim Wiersinga, a bi-lingual novelist based in the Netherlands, launched his writing career with two novels nominated for a prestigious prize in his home country. His debut, ‘Honingvogels’ (1992, ‘Honeybirds’) is situated in Antwerp in the 1920’s; a sudden reunion with a long-lost friend hurls the narrator into the Unknown. This debut was followed by an epic novel set in Antiquity, ‘Gracchanten’ (1995, ‘Gracchae’), featuring the revolt of the Gracchi brothers as seen through the eyes of a highly un-Roman character, Skamander, a tragic actor and heir to the last Macedonian rebel to resist the rising supremacy of Rome. Inspired by the likes of Victor Segalen (‘René Leys’) and Cao Xueqin (‘The Dream of the Red Chamber’), ‘The Pavilion of Forgotten Concubines’ has been released by Regal House Publishing (USA) in 2017.
More about ‘The Pavilion of Forgotten Concubines’
Meer over ‘Het paviljoen van de vergeten concubines’